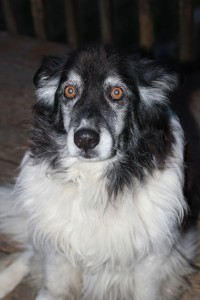 My husband and I went to a veterinarian dinner meeting on Tuesday night.  The company was entertaining, the food was excellent.  I’d expected that, but I sure hadn’t expected the emotional impact of the second speaker’s presentation.

Isn’t it wild how one chance encounter in  life can lead to so much more?  It just has to be the hand of God.  I was in awe and in near tears, listening to Dr. Darrow, a veterinarian from a small town in rural Iowa.  He spoke about his college years, when he was on the track team.  At a recent track team reunion, he learned of a tragedy:  a Kenyan member of the team had lost his little girl, Sharon, to rabies after she was bitten by a rabid dog.  Unbelievable though it seems, 24,000 people die of rabies in Africa every year.  Mostly children, mostly bitten by the domesticated dogs which wander freely in the villages.

This news affected Dr. Darrow so deeply that he began planning a mission trip to Kenya.  His goal was to find vaccine donations and some helpers, and then vaccinate as many dogs, cats and donkey as they could.  And last January, it happened. Named Sharon’s Project, after that little girl,  he and his helpers vaccinated 14,997 dogs, almost 2000 cats and 600 donkeys in areas where no one has enough money for their own health care, much less vet care for their animals.  People in remote villages swarmed to the vaccination sites, for rabies deaths in that country are far too common.  For Darrow’s second trip, coming up in January, Merck Labs is donating 90,000 doses of rabies vaccine!

When I got home, I wondered if there might be anything on YouTube about the project, and sure enough there is, at http://youtu.be/dQ7lGcP1Pms.  Do watch the video and stick with it to the end….the statistics and images in it just took my breath away.

Just one man started this, when he asked himself why even one child had to die from rabies in that country…and that one man is making such a difference. Goes to show that when someone says, “I’m just one person–there’s nothing I can do” he is sooooo wrong!  And if you’d like to help in some way, even with a small donation, there’s information at the end of the video.

BTW, the photo isn’t of one of the dogs in Africa–it’s just our old Harold, as I don’t have any photos from Kenya.