Have you ever received a pet as a gift? Even when you weren’t in the market for a pet?

I didn’t want another cat. I was a dog person, especially Corgis. And, we already had two very nice felines living in our home thanks to my daughters. Three years earlier, the girls had begged and pleaded for a cat for Christmas.  Not one cat between them, mind you, but a cat for each of them.  Though they were thirteen and seventeen at the time, I found notes written to Santa and couldn’t refuse their heartfelt pleas. 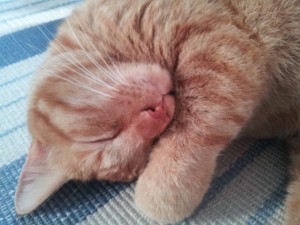 This past February, I was in my home office working, with Kayla beside me at the table finishing up her homework, when a loud meow echoed through the kitchen. “Kayla, please let the cat in,” I asked.

“Mom, they’re right here,” she said.  I looked over at her and, sure enough, Melody was sitting in her lap and Chloe was on the rug.

The meowing continued. I jumped up and hustled over to the kitchen door.  On our porch, on a day that was a frigid seven degrees and would drop below zero over night, was an emaciated, filthy orange cat. He saw me staring down at him and began wailing.

I opened the door and was greeted by a stench so foul I gagged.

Retrieving the old German Shepherd crate from the basement, I snuggled him into the huge box. He collapsed.  Between you and me, I doubted he would make it through the night.  Hours later, before I went to bed, he was still sleeping. (Yes, I checked to make sure he wasn’t dead.)The next morning he was alive, awake and hungry. I opened the crate and he crawled into my arms. My heart melted. I was a goner. I named him Ben after the hero in my first book.

Knowing what I had to do, I called the local animal shelter to report a stray. They had a report for a missing orange male.  My heart sank. I drove to the shelter praying it wasn’t “my” cat.  The missing pet turned out to be a neutered male, not my Ben.  Nonetheless, Ben had to stay for one week while the shelter examined him, called the neighboring vets, and posted his “found” status on the Internet.

The following Friday, Ben came home with me. He was bathed, neutered and vaccinated. Over the last seven months Ben has grown to triple his size. He’s fit, healthy and gainfully employed. Ben, you see, is now my office manager. He sleeps on the desk beside my computer all day while I work. Every couple of hours he stretches out across the keyboard to let me know that we need a break. He’s tried typing, but honestly his words don’t add much to the story.

I didn’t want a cat, but God knew better. And I thank Him daily for the gift of Ben.

Click here for  an Amazon link to buy her latest book:   Shenandoah Crossings 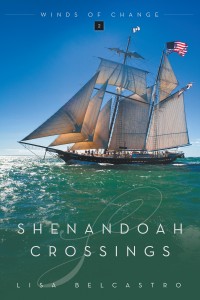 Tess Roberts may live on Martha’s Vineyard, vacation spot for movie stars and presidents, but the Island feels anything but idyllic. Tess has had it with lousy dates, lying, cheating men, and the rules that forbid her from working on her family’s centuries-old schooner, Shenandoah.

Lucky for Tess, she knows a secret—the Shenandoah has magical powers. Her best friend, Rebecca O’Neill, once stayed in Cabin 8 and discovered a time portal that transported her to 1775. A month after Rebecca’s “disappearance,” Tess’s father, brother, and Shenandoah’s annoying first mate, Hawk, plan to shut down the time travel for good by dismantling the cabin. But what if Rebecca might someday need to come home? What if Tess isn’t ready to say goodbye forever?

Sneaking onto the ship late at night, Tess slips into Cabin 8 and drifts off to sleep. She wakes anchored off the New England coast amidst the American Revolution in 1776. The British frigate HMS Greyhound has seized Shenandoah and taken the crew, cargo, and all onboard hostage. To make matters worse, Hawk is relentlessly tracking her, determined to bring her back to the twenty-first century against her will. Sparks begin to fly, from more than cannonballs and gunpowder….