Our two youngest children always wanted a dog, but with asthma in the house we couldn’t have a pet. But their health improved and Jeanette started rising early in the morning before school to look at newspaper advertising about dogs.

“Great dane, free to good home,” she read to me one morning as I prepared breakfast. A few days later, it was “St. Bernard. Good with children. Free.”

Jaron wanted a dog, too, but three years older than Jeanette, he wanted to be sure we could afford a computer he and Dad were thinking about.

Being the eighth child in our large family, I’d never had a pet myself. My husband brought in a couple of outdoor dogs for our oldest son, but I never became attached to them.

Trudy, a lady in our church raised poodles and my husband heard that they don’t shed like other dogs and heard they don’t bother people with asthma. One day Trudy called. A poodle had been returned because he had grown larger than a toy poodle ordinarily grows and would be offered at a bargain price. So the kids and Pop went the Trudy’s house and came home with the apricot-colored poodle named Appy.

Jaron, a high school student, went to the library and checked out a book on poodles and the dog immediately went into training. He learned all sorts of tricks. In about three days, Jaron said he was changing the dog’s name to Macho. He was bigger than expected, but also Macho thought he was a big dog.

Yet, Macho always assumed people loved him. I’d be watching TV next to my husband and he’d jump up on my lap, then squeeze himself between us.

I finally got up the nerve to pet him.

“He feels funny,” I said, from a background of being chased by dogs baring their teeth as a kid. “You could put two dogs in his hide.”

Didn’t take me long to figure out that how the Lord made him, so he could dry his hair by flipping his tummy skin almost over his back and shaking it in place again.

When the kids went to college, he was ours. He slept on our bed and woke me up in the mornings staring me in the face so I’d let him go out. His was quite spoiled, going to the doggie beauty shop more often than I went to the hairdresser. Try to put him out with snow on the ground, and he’d give me a look that meant, “Are you out of your mind? I’m not going out there.”

He had a vocabulary of about a dozen words and the word “walk” could send him into a frenzy. We spelling it, and he learned that. So we spelled it backward. He picked up on  actions, too. When I put on my sports shoes, he’d run and try to put his leash on himself.

But his intelligence was retarded in one area–cats. We visited my sister, who had a cat and when we arrived, the cat sat on top of a plastic table beside a lawn chair not moving a whisker. Macho could smell the cat, but searched and searched below the table and never found the cat.

We had adventures with Macho, and when he was gone, I missed him. He added much to our lives and our family will never forget him.

Rocky the goat charged out of nowhere into my new historical romance, The Lady Fugitive, which I hope will be published soon. I admit I had to do some research on goats. Jenny, disguised as a man, purchased a farm and the animals came with it.  But it wasn’t Jenny but Stu, a homeless orphan, who loves the animal most.

And here is a link for another one of my  books!   Imagine the Future You (Dynamite Decisions for Youth)

IMAGINE THE FUTURE YOU 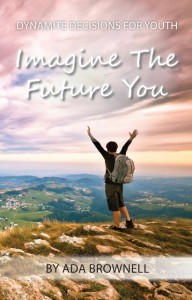 Will you be the person you dream of being—or someone from your nightmares?

You don’t need a fortune teller to reveal your future. You are the person who determines who you will be, what your life will be like, and how your hopes and dreams will be fulfilled. This book will show how to make the right connections, how to grow your talents, and how to begin believing in yourself and things greater than yourself—for a wonderful Future You!