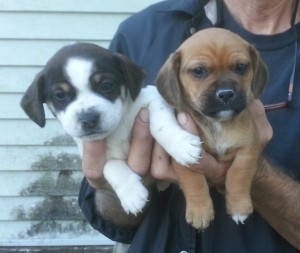 I am amazed and heartbroken over how many pets are just discarded.

Shortly before my husband and I were to leave for the holidays, a tenant moved out of one of our rental properties and abandoned five dogs—a black lab named Jackson, a lab/cur mix named Bruno and a dachshund mix with two puppies. The dachshund disappeared; the neighbors suspect the tenant took her. People advised me to call Animal Control for the other four. But in our county, as in most others, animals brought to Animal Control have a few hours to a few days, usually on the lower end of that range. I’m way too tender-hearted to carry good dogs to their death. So I enlisted the help of a friend and we googled rescue groups and sent dozens of emails asking for help. 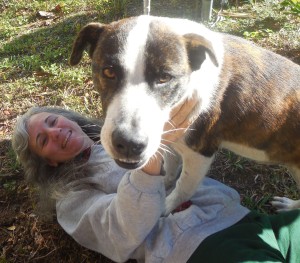 Over the next few days, neighbors gave the dogs food we provided, and rescues responded asking for information and pictures. I went out armed with my digital camera, unsure how the two larger dogs would respond to a stranger. I needn’t have worried. They rushed toward me, tails wagging. Once sure they were friendly, I handed my neighbor the camera and sat down to pet them. Bruno immediately pushed me backwards and attempted to plant a sloppy kiss on my face. I went home with some great photos.

The puppies were easy to place. (Who can resist those sweet faces?) The larger dogs weren’t. It was the week before Christmas, and with many rescue foster families traveling for the holidays, there was no room. (Sorta reminds me of another Christmas story.)

Soon we were down to three days until we were to leave, and Bruno and Jackson were still homeless. My boss had lost an older lab and decided to take Jackson. Bruno and Jackson grew up together and were inseparable, so I asked if we could keep them together one more day while we tried to place Bruno. I would have taken him myself, but I live in a condo where I’m allowed two pets. I have a dog and three cats, all rescues. (Three plus one equals two, right?) 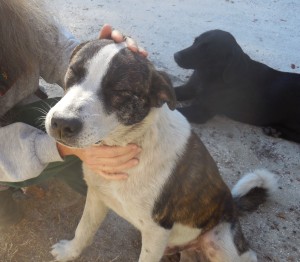 My boss told his family about Bruno, and his wife said to make sure he gets a home. When he told her that was out of his control, she said, “Then lie to me!” She promised to distribute Bruno’s pictures around the school where she teaches. By lunchtime, a family had agreed to take him. By the end of the afternoon, both Bruno and Jackson were on their way to their new homes with their first scheduled play date lined up.

Bruno now has a home on ten acres with a loving family, other dogs and cows. He’s living the good life.

Unfortunately there are hundreds more like him who aren’t  that lucky. Calling Animal Control is quick and easy. Contacting rescues involves time and effort. But nothing beats the feeling of knowing some sweet dog or cat has found a forever home and you had a hand in it. In Motive for Murder, Jessica Parker finds herself caring for her deceased sister’s dog. Although she has no interest in owning  a pet, little Buttons winds his way into her heart.

Have you ever taken in a pet you didn’t really want, only to have it win you over? 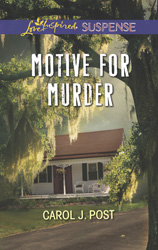 Jessica Parker left Harmony Grove with bad memories and a vow to never return – until she is called back eight years later to deal with her sister’s suicide. When all the evidence points instead to murder, she is determined to find the killer and bring him to justice. Her handsome new neighbor is eager to help, but she’s sure he’s hiding something.

Undercover FBI agent Shane Dalton is in Harmony Grove investigating the crash of a plane full of cocaine and gets more than he bargained for when he runs into Jessica. She’s a little rough around the edges, and he isn’t sure whether she’s involved or is just going to get in his way. But soon it becomes obvious that someone wants Jessica gone from Harmony Grove.

As the threats intensify, Shane finds himself in a race against time to solve both cases. Because the closer they get to the truth, the closer the killer gets to making them his next victims.
4½-Star RT Review – “…Gripping from the start, the second book in the Harmony Grove series keeps readers on the edge of their seats with the various twists and turns.” 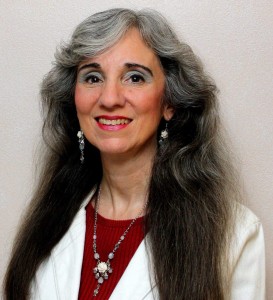 From medical secretary to court reporter to property manager to owner of a special events decorating company, Carol’s resume reads as if she doesn’t know what she wants to be when she grows up. But one thing that has remained constant through the years is her love for writing. She started as a child writing poetry for family and friends, then graduated to articles which made it into some religious and children’s publications. Several years ago (more than she’s willing to admit), she penned her first novel. In 2010, she decided to get serious about writing fiction for publication and joined Romance Writers of America and her local RWA chapter. In 2012, she got “the call.”
Carol lives in sunshiny Central Florida with her husband of thirty-three years, who is her own real-life hero, and writes her stories under the shade of the huge oaks in her yard. Besides writing, she works alongside her music minister husband singing and playing the piano and holds the position of church treasurer. She enjoys sailing, hiking, camping—almost anything outdoors. Her two grown daughters and grandkids live too far away for her liking, so she now pours all that nurturing into taking care of three fat and sassy cats and one highly spoiled dog.
You can find her at www.facebook.com/caroljpost.author and www.caroljpost.com.