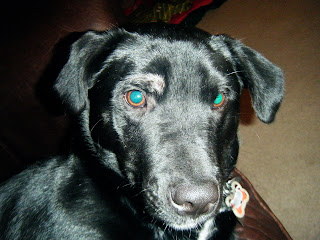 Okay, so my beloved Moodoo (mix of lab and Catahoula) tells me it’s time to go outside. (He whines twice, then nudges me. If I don’t respond immediately, he puts his paws on my arm and pushes me) Being a devoted dog owner, I slip on my shoes, grab his leash, and we head out the door. Now, he decides he wants to do his business in the woods around the house. Okay, works for me. (He’s trained not to go in the “lawn” where hubby would have a fit) So off we go. The squirrels are playing in the trees, so we move slower. I’m looking at a squirrel and BlueJay having it out. Amusing me. (Hey, I’m procrastinating writing, okay? Give me some latitude here) We’re strolling along, Moodoo enjoying being outside since it’s cooler today than it has been all week. He’s sniffing the air, the bushes, the ground, the trees…everything. So after about 30 minutes, we head on back into the house. I brush him right quick before I let him in. (beggars lice is abundant in the woods here in Arkansas) and get the doggie wipe for his paws so he doesn’t bring in any dirt, twigs, etc. He’s good. Comes in, drinks some water, and plops down for a nap at my feet under my desk. All good, right?

I sit down and check email, Twitter, and Facebook (told you I was procrastinating) and I feel something “crawling” on my arm. Look down and Oh. My. Gosh. It’s a tick. Ick. Grab it, kill it, flush it down the toliet. Shake off the ick feeling. Probably brushed against a tree or bush or something. No biggie, right? It’s dead and flushed, not to worry anymore, right?

Back to checking email, Twitter, and Facebook (hey, I was away from my desk for a minute or so…might’ve had something come in. Remember, I’m procrastinating) and I feel something crawling on my leg. More than what I felt on my arm. Push out from under desk and find three ticks crawling on me. Triple ick. Get them off. Kill them. Flush them in toliet. But not taking any chances. Run and draw a hot shower. Take said hot shower. Get new clean clothes and throw others in washing machine and start it. I feel mucho better.

Then it dawns on me–poor Moodoo. What if he’s eaten up with ticks?

Sigh. So I call him to me, make him flip over and check his legs, belly, tail, back, head, ears, etc. What did I find? NOT A SINGLE TICK. Nothing.

Why can’t they make a K9 Advantage for humans?

AND NOW….here’s some information on Robin’s newly released book!!

DELIVER US FROM EVIL

“The kind of novel ‘Ripped from the headlines’ was meant to describe. Compelling.”–James Scott Bell, author of Deceived and Try Fear

A beautiful yet tough woman working in a beautiful yet tough setting, Brannon Callahan is a search and rescue helicopter pilot for the Great Smoky Mountains National Park. Strong faith and a decorated history of service have kept her one step ahead of on-the-job dangers, but there’s no precedent for what’s about to happen.

After a blizzard takes down a small plane carrying U.S. Marshal Roark Holland (already haunted by a recent tragedy), Brannon must save him in more ways than one and safeguard the donor heart he’s transporting to a government witness on the edge of death. Otherwise the largest child trafficking ring in history—with shocking links from Thailand to Tennessee—will slip further away into darkness along the Appalachian Trail.

Deliver Us From Evil (Feb ’10, B&H Publishing)
“The kind of novel ‘Ripped from the headlines’ was meant to describe. Compelling.”–James Scott Bell, author of Deceived and Try Fear

Dead Air (March ’10, Steeple Hill Suspense) Fear No Evil (Aug ’10, B&H Publishing)
_________________________
NOTE:  If you are reading this on Facebook, come on over and visit the “All Creatures Great and Small” blog!
There are dozens of posts by authors talking about their pets,  about my own life in the country, and there’s also a  series of short stories about the interesting, often amusing experiences of The Old Horse Trader!
http://roxannerustand.blogspot,com