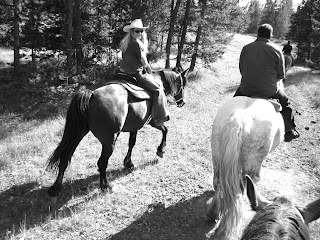 Verne Upmier was in the business of training and trading horses long before many of us were born. He was one of the early distance trail riders, too–he rode on many of the first 65 -100 mile rides held in Iowa back in the 1940s. You’d think those rides would be memorable mainly for the sore muscles afterwards, but Verne says that some of them proved unforgettable in unexpected ways.

In 1944, fifty-two riders came out to his stables and saddled up for a sixty-five mile round trip ride between Cedar Rapids and Marengo. The day was pleasant and all went according to plan–until the final leg of the trip. The fateful moment came when the tired riders were served a nice trailside lunch near the Amanas before continuing their jaunt back to Cedar Rapids.

Vern was in the back third of the group. “It got to be kind of strange,” he recalls. “We kept coming across horses tied to trees and fence lines, with no riders in sight. The closer we got to home, the more of these horses we saw. We figured the riders were just worn out and had quit.”

When Vern finally got home, he discovered that the missing riders were suffering from problems far more acute than saddle sores. “There were people laying all over the yard, and cars were taking load after load of them off to the hospital,” he says. “The riders had tried to get as close to home as they could on horseback, but once the illness hit they were soon too miserable to continue.”

Nearly all of the fifty-two riders were sick to some degree with food poisoning, and twenty-four were hospitalized. The ham served for lunch was later identified as the cause. “There weren’t too many of us who weren’t sick, so it took quite a while to fetch all those horses tied along the trail route,” Vern remembers. “I didn’t mind a bit, though, because the alternative was so much worse. I was just happy that I hadn’t felt like eating lunch!”