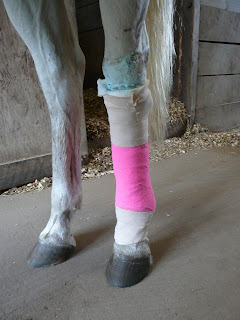 Pets–from tarantulas and snakes (thanks, Andy and Brian!) to rabbits, birds, dogs and cats–have been a big part of my life, with many, many other types of creatures thrown into the mix–but my favorites have always been the horses.

We live on ten rolling acres with lush green grass, shady trees, good fences. It’s Horse Paradise not only for the good grass and safety, but for the fact that once a horse comes here, it stays until it grows old and dies. We now have a thirty-year-old smutty palomino, a snowy-gray twenty-year old, and a sorrel twelve-year-old who defines the word “easy keeper” (who is now spending his days in the diet lot–a corral where he has ample fresh water and a little grass hay, rather than the heavy grass out in the pasture. ) Oh–and there’s another one out there, a horse we’re boarding for free for a friend. She’s the baby of the group, at eight.

Mature horses do have their moments, but by and large, it’s mostly a sedate group. So when Powder–the gray mare–came in for her morning pellets, I took one look at the way she was moving, did a double take, and reached for my cell phone to make the equine equivalent of a 911 call. She’d clearly kicked a leg through the woven wire fence out in the pasture, somehow managed to get caught in it, struggled, and did some serious damage: a good 2 inch by eight inch strip of hide completely ripped from the front of her back leg, exposing tendons and deeply lacerated tissues, plus a deep, horizontal slice across the anterior (inside angle) of her big hock joint. She’d also managed find a low, wet spot in the pasture and slog through the mud afterward, completely contaminating the wound.

When your kids get hurt, they cry. They might fuss over the clean-up process. Then they probably show off their badge of honor–a big Band-Aid–to everyone. Horses? Can’t cry, of course, but you can sure see the tension–the fine, tight wrinkles under the eye and at the nostril, and the effort to avoid being touched where it hurts–though most of them are amazingly stoic. Not taking any chances, the vet wisely sedated her to clean the wound thoroughly, then he bandaged it….and now, I’ll be re-bandaging it for at least the next two months, along with delivering oral antibiotics.

When people talk about a medicine tablet being so big “it’s like a horse pill” one might assume that a horse would be willing to consume something that size. Good luck! You know the 800 mg size of Bactrim that your doctor might prescribe for you? She gets twenty of those tablets, divided into two doses. She’d never eat them, though. Bitter. Ewwww! So I dissolve them in water, add a lot of Karo syrup to sweeten the taste, then use a 60cc syringe (no needle, of course) to squirt it waaaay back in her mouth.

And the Band-Aids? Oh, my. This is horse leg owie, and there are seven different products on her leg now: an antiseptic, water-based cream, Telfa pads over that, then Kling gauze, Combi-Roll (like fluffy sheet cotton, but contained between denser layers) held by wrapping with Brown Gauze, then Vet Wrap, and then Elasticon at the top and bottom edges to help anchor the whole shebang. Whew! The funny thing? It had been so long since any of the horses here got hurt, that I hadn’t looked at the museum-quality jar of antibiotic salve out in the barn for years. It out-dated in 1989! Needless to say, that one is the garbage. We’ll be re-dressing it every three days for the first two weeks, then we’ll keep the pressure bandage on it for a total of two months and not disturb it as much…we’ll try to get five days out of each wrap. It has to be wrapped until the wound is closed, so we’ll have our fingers crossed!

So….what do you think of Powder’s fashionable, hot pink bandage?