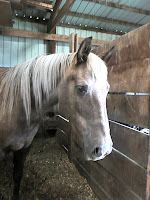 It’s been hot here. Hot and humid and stormy. I am really, really looking forward to a cool spell! The weather got me thinking about those long, endless days of summer during childhood…when the span of time between the last day of school and September seemed too long to even imagine. Now, I seem to be in an alternate universe, where Memorial Day and Labor Day are just a breath apart.

What are your favorite summer memories?

I got my first horse when I was six years old. What an exciting summer that was! Jeannie seemed tall as an elephant to me. She was supposedly part Welsh, part quarter horse and around fifteen years old. I’m guessing she was closer to thirty, but she’d basically “been around the world” and was the perfect first horse.

Have you seen those westerns where the cowboys leap up on a horse from the rear? That never worked for anyone I knew! In fact, most of my riding buddies had to mount by grabbing a chunk of mane and swinging up. Didn’t work for me, though, because I was too little. I basically had to grab some mane and shinny up her leg…until I learned to just let her graze. Then I’d sit on her neck, just behind her ears, tug a rein, her head would come up, and I’d slide into place…backwards. (smile) That helped until I was a year or so older, and could swing up like everyone else.

My mom would be quite perturbed when I was supposed to be practicing the piano and had eight faces peering through the window at me–four friends sitting on their horses–waiting for me to join them. It wasn’t conducive for concentration!

I look back and think it’s a wonder I survived some of the adventures that came along, often far from home. If my parents had only known!

Being a little pipsqueak had disadvantages other than mounting–it was mighty hard to reach things up high.

My old horse had trouble with dry, cracked hooves, and the farrier recommended an economical alternative to hoof dressing through the winter: plain ole lard, slathered on the hooves right up along the coronary band (where the pastern stops and the hoof begins.) My dad brought home several gallon pails of it.

Keeping the stable clean (really, our “stable” was an addition added to our garage, with a box stall and a tack area) was like playing house. I loved to pound nails for hanging things and keeping things “just so.” The following summer, while I was cleaning out there, I reached up for a forgotten container well above my head.

How I teetered precariously on a step stool.

My surprise when I realized the lid was gone…

And a millisecond later, the horror of feeling warm, melted, rancid lard dump over my head. Complete, mind you, with an ample supply of flies that had drowned in it through the summer months. The slime in Ghost Busters has nothing on melted lard!

My clothes had to be thrown away.
Shampoo couldn’t cut through that thick grease.
We tried vinegar, and lemon juice, and more shampoo.
My hair hung in dark, limp, stinky strings for a good week.

Maybe it didn’t look quite as bad as the Jell-O incident….but that’s another story!

So…have any good summer memories to tell from your childhood?! We’d love to hear them!

Incidentally, thanks to everyone who has been stopping by. The visitor numbers have been increasing a lot, and it’s great to have you here!

Blessings to all,
Roxanne