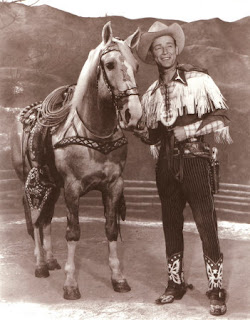 MEMORIES OF ROY ROGERS and TRIGGER

Do you remember the 1930s and 40s, the glory decades of silver screen westerns, when our heroes were cowboys and simple justice always prevailed? Or, if you’re a bit younger, do you remember hours spent in front of an old black and white TV, following the adventures of Roy Rogers, Gene Autry, the Lone Ranger, Hopalong Cassidy, and all the others who thundered across the prairies in weekly pursuit of the latest desperados? Maybe you’re younger yet, and remember the old re-runs.

Many a holster-clad young fan of that era would have traded his (or her) favorite six-shooter for the privilege of meeting one of those stars. Most would have been green with envy had they known of the friendship between Verne Upmier and Roy Rogers.

During the early 1940s, Rogers, accompanied by Trigger’s trainer Glenn Randall, traveled throughout the country performing at rodeos, state fairs, and major expositions. Often, the distances between performances were too great to manage in a single day, so Roy established various locations for overnight stabling. Iowa was an ideal midpoint for both his east-west and north-south routes.

Rogers and Randall contacted a friend of Verne’s, Roy Gaddis, for stabling in Cedar Rapids, and the men usually went out for a “night on the town” whenever Rogers came through the area. Verne remembers several times when Trigger was brought out to entertain the foursome with a sampling of his amazing number of tricks, after they returned from late-night dinners.

In 1944, there was a 65-mile competitive trail ride through Iowa. Roy was in town at the time, so Verne took him to the trail ride dinner. Roy politely declined when asked to sing, saying that his contract prevented him from singing in public unless he was backed by The Sons of the Pioneers. Instead, he entertained the audience with a long and colorful talk about his experiences in the movie industry.

“Rogers said he wasn’t an experienced horsemen before becoming a movie star,” Vern recalls. “He had grown up on a farm, and went to Hollywood to try to break into the movies. His agent recommended that he become a singing cowboy, since this was very popular at the time, but for that he needed a horse. So, he found a well-broke palomino and then hired Glenn Randall to continue the horse’s training.”

During the early years, Randall would cue the horse from beyond camera range. Verne is quick to note, however, that Roy eventually became an excellent rider, and also learned to give the trick cues himself. There were a lot of cues to learn, for the horse had been trained to do to dozens of tricks.

Some of the tricks were quite dramatic. Those who watched the 1950s television series may remember how Trigger often “rescued” Roy from the bad guys by racing a considerable distance with his ears pinned and teeth bared. He would appear to bite and stomp the hoodlums he caught, but of course he never actually touched them.

One of Trigger’s more unusual abilities was that, prior to performances on stage, he could be cued to eliminate, thereby avoiding any awkward moments during the show.

Trigger occasionally appeared on stage with a flaxen-maned pony owned by a distant relative of Verne’s. The pony appeared as a diminutive sidekick of Trigger’s, and would mimic Trigger’s act. “He knew at least 30 or 40 tricks,” Verne says. “Cued by a subtle hand movements, he could pull the correctly numbered card from a rack to ‘answer’ math problems, he would lay motionless on his back, with all four feet in the air until cued to get up, and could do just about any trick you could think of.”

Though children of that era repeated and pondered the incredible rumor that Trigger was–gasp!–a mare, the horse was indeed a stallion. There were, however, five “Triggers” who were used for filming. The original, who traveled with Roy to all the rodeos and fairs, was the horse who had the vast repertoire of tricks.

This Trigger was used for all of the close-up shots in the movies and TV shows, and was the one mounted for display in the Roy Rogers Museum after the end of his long life of stardom. He was a Tennessee Walker, but his gaits were never seen on the screen because his stand-ins were used for the action shots such as running, falling, and racing down steep slopes. It wasn’t easy for Rogers to find the other four palominos, Verne says, because horses with the necessary wide blaze often have glass eyes, and the blue color wouldn’t photograph well.

Even at the height of his stardom, Roy was a very likable guy, according to Verne, and never seem to let his fame affect his easy-going nature. One year, Verne and a number of friends took a trip to Mexico. En route, they noticed a show bill announcing a performance by a world champion cutting horse at a State Fair, and decided to stop. They didn’t have advance tickets, and the show was sold out, so they decided to wander through the fairgrounds before continuing their trip.

Roy did remember, and when he heard that the Iowa group couldn’t get tickets, he promptly arranged for a set of the best seats in the house, then offered seats for the next show as well.

To childhood fans of that smiling, singing cowboy on the flashy Palomino, it must be gratifying to hear that Roy was just as congenial in real-life as he appeared on television so many years ago, and that even in real-life, he deserved to wear a white hat.