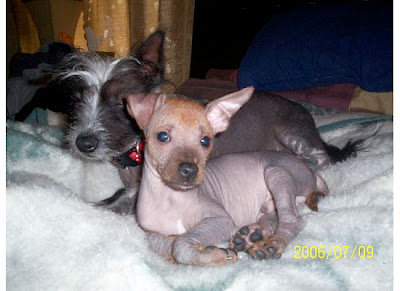 Beauty: In the Eye of the Beholder?

We’ve all heard the old saying that “Beauty is in the eye of the beholder.” So many things in life are subjective. Take for instance my two dogs. The little brown guy is Ponchee (Short for Pong Choolie) and the little black and white gal is Zippy. These two strange little creatures are “hairy hairless” Chinese Cresteds. The Cresteds are an ancient breed of dogs that grow hair only on their head, feet and tail. If only I had a dollar for every time someone thinks they have the mange! To some, my hairless babies are ugly, but to me, they’re more precious than gold.

I’m a pet lover from way back and can’t write a novel that doesn’t include a pet as a minor character in my plot, mostly rescues that wriggle their way into someone’s heart. In Queen of Hearts, my April 1 release from Desert Breeze Publishing, my main character, Daphne Dean, who is a newspaper reporter turned spy, finds a stray dog on the street. She rescues the skinny, dingy-haired little guy from a life on the street when he captures her heart. 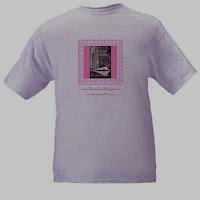 WIN A FREE T-SHIRT–a gift from this author!!

She will have a drawing from the names of people who leave comments on her post, here….so don’t forget to say “Hi” and then stop back to see the name of the winner!!  Good luck! 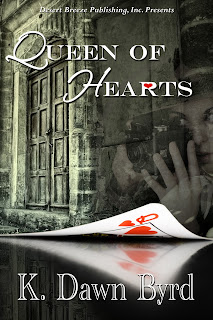 QUEEN OF HEARTS
by K Dawn Byrd
Desert Breeze Publishing
ISBN:  978-1-936000-22-7
Daphne Dean is proud to be serving her country stateside during WWII as a reporter and an Office of Strategic Services operative. When the photograph she takes of the crowd at a murder scene places her on the mob’s hit list, she’s forced into hiding in a vacant mental asylum in the middle of nowhere with terrifying secrets of its own. ??Daphne believed herself to still be in love with her ex-fiancée, Kenneth, until she spends several days locked away in the asylum with Vito, the mob boss’ son. Can she put the terrifying events that occurred there behind her and allow herself to pursue a relationship with Vito? Or, will she return to Kenneth who has turned his back on his country by becoming a draft dodger and a black market racketeer? One thing’s for sure, it won’t matter if she can’t escape the mental institution alive.