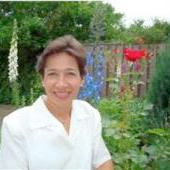 Ruth is offering a FREE copy of her newest book—the winner will be drawn from the names of those who post a comment here!

Our local paper usually has an ad in the classified section for the animal shelter. Each week there’s a photo and write-up of one of their dogs or cats. I had resolved not to have any pets for a long while. We’d recently moved back to the U.S. from the Netherlands, and our two cats stayed behind where they enjoyed a good life.

But suddenly, I saw a photo of a cat whose doleful eyes just stared out at me, saying “Adopt me!” Creighton was a cream-point Siamese mix who’d been dropped off at the shelter along with his 4 brothers, due to the “uncertain economy.”

I tore out the ad and put it on my desk, deciding to do nothing rash. A few days later I showed it to my 15 yr-old daughter. She immediately said, “We’ve got to go visit the shelter.”
When we arrived there, there were so many cats that we no longer knew which one to choose. Creighton and his brothers were beautiful, with their creamy colored fur and their pale blue eyes. But there were other lovable cats who also needed a home and had been at the shelter a lot longer. One was named “Alley Anna,” a small 6 yr. old who’d been at the shelter the longest of all, about three years. She didn’t stand out from the other, more assertive or friendlier cats, but the staff assured me she was a dear cat.

We finally decided we had to take both her and Creighton home. They were both quite shy the first few days, hiding under my bed or in my walk-in closet. Little by little, they have ventured out. Alley Anna is the sweetest cat, and I feel bad how easily an animal can be overlooked at a shelter because its personality doesn’t shine in the few minutes one is there. Creighton, who’s only 1 1/2, and had never seen Alley Anna before we brought them home, since they were in different rooms at the shelter, immediately bonded with her. Wherever she found a hiding spot, he’d tag along after her, as if she was his mother.
Here they are on a shelf in my closet.