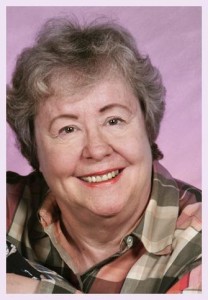 My husband always said I was gaga about my animals.  That’s true.  If asked—or even if not—I can go one for hours with stories about the dozens we’ve had.  However,  I feel certain there’s a word limit to this blog and I’ve learned people get bored when I babble on and counter with stories about their grandchildren.   For that reason, I’ll stick to one topic, “How Our Pets Saved Our Marriage.”

George was far more romantic than I.   For birthdays and Christmas, he came up with the most wonderful and creative ideas for presents while my gifts usually ran along the here’s-a-pretty-shirt-and-tie-and-some-chocolate-covered-pretzels line.    For our anniversary many years ago, George gave me a pair of peach-faced love birds.  Beautiful creatures.   Because I was a Spanish major, I named then Don Quixote and Dulcinea, for the famous lovers of Spanish literature.   For a few months, they shared a cage, cooing and loving and 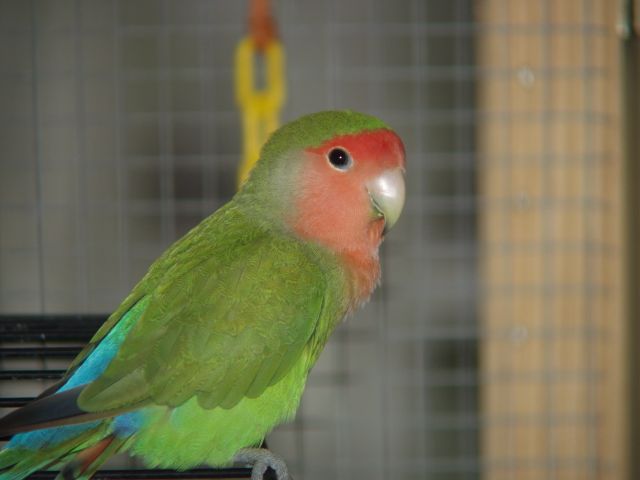 seemingly very happy.  One evening nearly six months later, we came home from work to find that Don Quixote’s right cheek had been torn open and he kept his distance—on the other end of the perch—from Dulcinea.   The next day, I bought another cage and separated them.  I also changed their names.  Don Quixote became Scar Face because the Al Pacino movie had come out a few months earlier.  Dulcinea became Bone Crusher, named for a boxer named Bone Crusher Smith.

The man at the pet store where George had purchased the birds said the attack could have been because the birds were both male.  Evidently, sexing birds is very hard.   I didn’t care.  We weren’t going to raise little lovebirds and they seemed very happy to cooing to each other from different cages.  Harmony was restored.

I also had a blue parakeet named Paco.  George wanted to teach him to say, “Paco wants a taco.”  Sadly, the only thing he learned to do was to whistle for the dogs, a sound that confused the dogs greatly.   Paco’s cage was on a stand by the bedroom window.  One day, we had the carpets cleaned and the scent was strong enough I feared it would harm Paco.  So, I opened the bedroom window but forgot to pull the screen down.  After ten minutes, I heard a crash from the bedroom.  I ran in  to find the cage had been blown on the floor, popped open, and Paco was gone.   After I looked around the bedroom but couldn’t find him, I ran outside.  First, I looked all around the yard and the neighbors’ yards.  No Paco.  Then I leaped on my bike (back then, I was able to leap), and took off around the neighborhood looking for him, calling, “Paco, Paco” and even using the dog whistle.  Thirty minutes later, I still couldn’t find him so I headed home.  One more search of the yard and another around the house still didn’t turn up my bird.   The next evening, George was in bed and watching television when he called me.  “Jane, there’s something moving in the closet.”    And, yes, there Paco was, nestled in the sheets.

So, you may ask, how did this save your marriage?

A few weeks after these events, George and I had a huge fight.  I have no memory of what this was about but I was furious.  I stomped out of the house, shouting, “I’m leaving”.  George  came to the garage door and said, “You’d better take your birds with you or I’ll let them loose.”   Now, George would never have done that.  He loved our pets, too, but it was a terrific threat.   I went inside, picked up the three cages, and attempted to force them into my compact car.  Paco’s cage was small and fit easily in the front seat.  I could get Scarface’s large cage into the back seat on a slant, but no way did Bone Crusher’s cage fit.   After five minutes of moving the cages around, I admitted defeat.  I was going to have to stay with George.

Here’s an Amazon link for you to buy Jane’s charming book! The Wedding Planners of Butternut Creek: A Novel 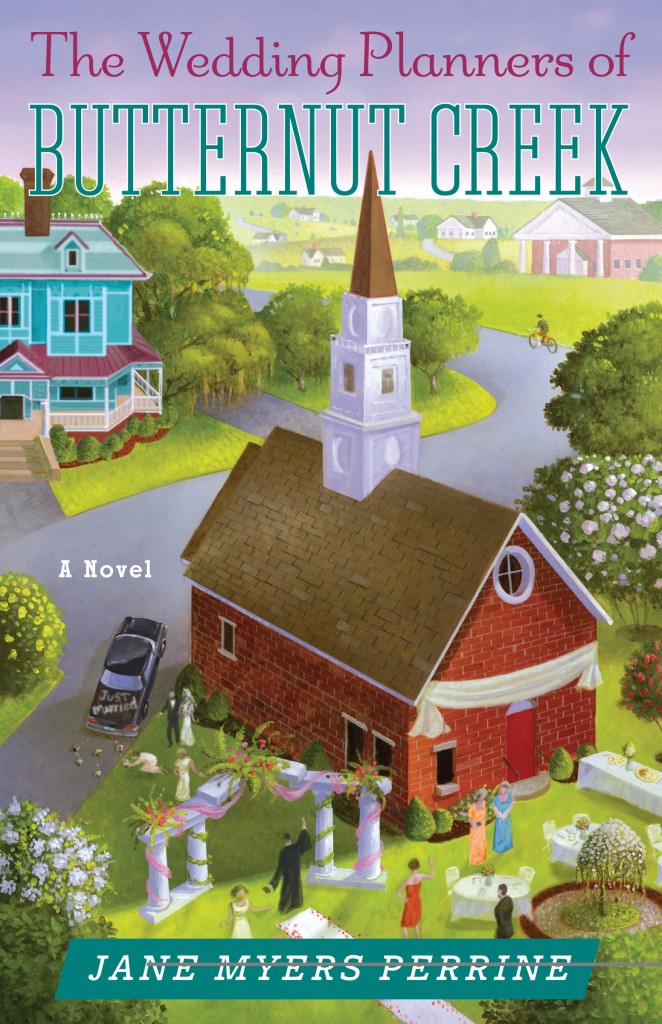 The path of planning a wedding is never smooth.  However, Adam and Gussie find that task even rockier when the Widows step up to help.  Filled with confidence because they played an important part in getting Adam to propose and helping Gussie set a date, choosing flowers and invitations does not scare them.  Then Adam’s sister Hannah shows up, and  amid all the planning and activities, they must take up the task of matchmaking again.  REVIEW   From Kirkus Reviews    The third installment of the Butternut Creek series . . . allows a continued glimpse into the quirky, eccentric citizens of this small Texas town. Perrine offers a pleasant, meandering glimpse at love and courtship in Butternut Creek . . .that combines humor and emotionalism.. . well-crafted and engaging . . . with funny, authentic characters.

About the author:
Award-winning writer Jane Myers Perrine has worked as a Spanish teacher, minister, cook, rifle instructor, program director in a state hospital, and been an active volunteer but she always wanted to write.   Finally, she found time and has published books with  Avalon Books, Steeple Hill Love Inspired, and FaithWords, a division of Hachette Book Group.  Her short pieces have appeared in the Houston Chronicle and Woman’s World magazine.    Jane’s Butternut Creek series is about a young minister serving in the beautiful Hill Country of Texas and is filled with affection and humor.  The Welcome Committee of Butternut Creek is the first book in the series.   Published in April, 2012, it has been nominated for the RITA award, the most prestigious honor for writers of women’s fiction.  The Matchmakers of Butternut Creek was published November 20, 2012.  The third book, The Wedding Planners of Butternut Creek will be available November 5, 2013.

Jane lives north of Austin where her life is controlled by two incredibly spoiled tuxedo cats.   When not writing, she spends her time swimming or cheering for University of Louisville and Kansas State football and basketball.
Her website and blog are at  JaneMyersPerrine.com