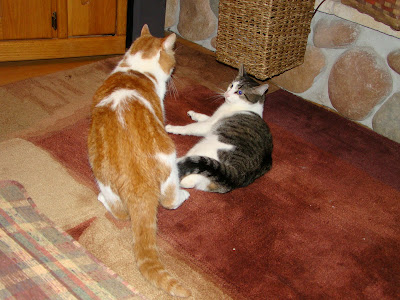 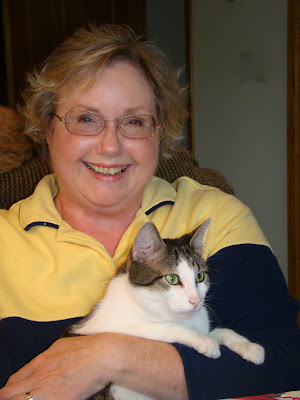 I love cats. I am not happy if I don’t have one in my house.
I love it when one of my cats comes and lies on my lap
when I’m trying to write.

I got my first cat when I was 10. I have only been
without a cat for the years I was in college and as an adult,
for two brief spells before a major move. The cats of my
adult life have been Professor (the smartest cat I’ve ever
had), Sheba (a sweet little black cat), and Shadow
(the Siamese mix who was the pet of my children’s
childhood).

After Shadow passed away, I waited till we moved
to Wisconsin before looking for another pet. The week
before our first Thanksgiving in our home in the
northwoods, my dh and I visited the local animal shelter
and picked out two strays. I chose a dainty golden tabby and
named her Sadie (my sweet little lady) and my dh chose a
large marmalade cat that he named V-8. Not after the
juice, but for V-8’s mighty purr. We also lovingly call
him our Cadillac cat. He’s definitely a full-sized
luxury car.

My dh and I were happy with our two adopted
cats and didn’t think we’d see any more. However, when
our daughter came to live with us, she brought her
cat, Tricksey. I always make it clear that Tricksey is a
boy and his real name is Trickster. My daughter doesn’t agree
but I don’t want my little grand-kitty to be confused about what he is.
*GRIN*

So we were up to three cats, something I hadn’t done since
I babysat a cat for my sister long ago. Then my mil passed
away. We had promised her that we would take her cat if he
needed a home. So in August, Mootzie, a large male
golden tabby, came home with us. Mutza is Slovenian
for cat so all my mil’s cats were Mootzie from the time she
was a little girl. (Her parents had immigrated from Slovenia
right before WWI).

Poor Mootzie had a shock coming. I don’t think he had seen
another cat since he left his littler 10 years ago. And here were three.

Predictably Sadie was miffed. She is half the size of the
other cats but rules the roost. She hissed and
attacked Mootzie. So he began to hide. I was worried
he might not eat or drink enough, but self-preservation
has won out.

Mootzie is getting braver and braver. But the breakthrough
was a little catnip. I don’t think Mootzie had ever “indulged”
before. I chuckled and watched him even try to start a
play-fight with V-8. And yesterday, he even touched noses
over a bowl of food with Tricksey.

So Sadie still isn’t happy about our newcomer, but Mootzie
has become a member of the family. And we love to see him
starting to schmooze with the other cats. It really makes me
smile. Cats are such a joy in our everyday life. We’re glad
to have our four. Without them, our home would be no fun.

Right now I’m writing the first book in my new Love Inspired
Romance, A Shelter of Hope, and I’ve written in a pair of
golden retrievers, Roxie and Dottie. Roxie is namesake for
Roxanne Rustand of course, a dear friend. Shelter of Hope
will be out next fall.

My next release is Her Patchwork Family, a Love Inspired
Historical romance in December. The story doesn’t boast
any furry friends, but a woman who is setting up a home
for stray children, orphaned by the Civil War. Hope you’ll
take a look at it at your local Walmart.

Thanks for having me as a guest, Roxanne!