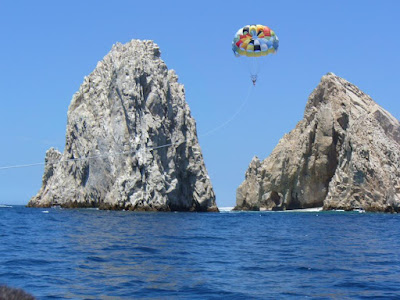 I need to apologize for not posting consistently lately. I’m going to try to be better, and show up here twice a week from now on! I had some writing deadlines and we’ve also been traveling a bit–five days up in Minnesota, back home for one day, and then we were off to San Diego, where we planned to head out on a five-day cruise to Ensanada and Cabo San Lucas.

My husband occasionally earns trips through his work as a veterinary sales rep, and it’s always fun to have a chance to travel! This trip was uncertain for a while–Hurricane Rick, expected to be the worst hurricane to hit the area in forty years, was scheduled to reach Cabo the same time we were. We weren’t sure until the second day whether the ship would have to turn back north and go up the California coastline (unfortunate for the many Californians on the cruise!) or if it would still be able to head south.

Luckily, the weather cleared and we were able to complete the cruise as planned. Which led to some cool memories, because I got to parasail for the first time. I am sooo challenged by heights that I avoid railings overlooking central courts in shopping malls, and hotel rooms higher than twenty floors leave me queasy. So parasailing–oh, my! But my husband had already done it–so how could I back out?!

I’m sooo thankful that I dredged up enough courage, because it was just the most amazing experience, floating so peacefully high, high, high above the Sea of Cortez. I thought it would feel windy and fast, but instead, despite the speedboat bucking through the waves down below, it was like flying–amazing. It was rather like the one time I ever got to ride a cutting horse, and felt like the horse was effortlessly dancing beneath me. That was an amazing rush, too!

Sooo…what are some of your favorite experiences, after facing your own fears and going off on an adventure?