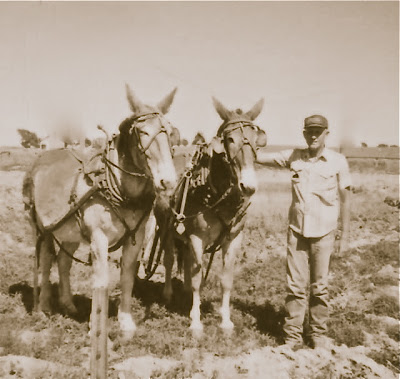 Verne Upmier was the man to see about horses in Eastern Iowa for seventy years, and his roots certainly went deep in Iowa soil. His farm was homesteaded by his great-grandfather William, a farmer and spinning wheel craftsman, who was one of the first white settlers in the area and who built his home along the busy route of a four-horse stagecoach line.

Transportation, mail delivery and the government’s ability to process information had definite limitations in those days. When William applied for a homestead abstract in 1838, the paperwork went by horse to Philadelphia, which was the nation’s capital at that time, and the final documents didn’t get back to William until 1843. The farm has remained in the Upmier family since then, and Verne, his father, and grandfather were all born in the house that is still in use to this day.

The land has seen many changes through the years. Verne recalls that during the 1930s, a well-broke horse was worth $35, pasture board was $10 per month, and owners were charged $20 a month for a box stall. Draft horses and mules remained a valuable commodity on the smaller farms until the mid-1940s, when the use of tractors became universal.

Still, the well-prepared farmer often kept a harnessed team tethered nearby, ready to pull his new-fangled tractor out of the mud during spring plowing.

Modernization eliminated a lot of the potential excitement that could occur when a farmer had to rely on horses and mules. “Before the mechanical corn picker was invented, we used a pair of mules to pull a high-sided wagon through the fields,” he remembers. “We would have to walk down the rows, pick the corn by hand, and toss it up into the wagon.”

This laborious task involved minimal risk of equipment failure, though it now and then the mule power failed.

“We had to cross a creek to reach one of our fields,” Verne says. “The team would stop in the middle of the creek to drink, and then go on. One year, we had a pair of mules that must have held a business conference before going to work for the day. We got to the middle of the creek, they stopped for a drink, and then they both went on strike. My dad and I tried everything, but they wouldn’t budge. Finally, we had to wade into the water to un-harness them, lead them out, and hitch up another team to take the wagon up onto the bank. We then re-harnessed those mules and they worked just fine for the rest of the day.”

The obstinate team must have been satisfied with the results of their mid-stream strike, because the next day they balked in the same spot. Verne’s dad decided that he’d put up with the pig-headed mules long enough. He got his Model T truck, the one with the famed “Ruxall Rear End” that could gear down to one mile per hour, and drove back to the creek with a couple lengths of log chain. The mules hadn’t moved an inch, so he snapped a neck chain on each one, hooked the chains to the truck, and drove off at a snail’s pace. He didn’t look back, he just kept going.

“Well, those mules weren’t going to give up, either. Their necks stretched and stretched and stretched–until they must have decided that the issue wasn’t worth dying over, because they came on out of the water at a good clip. They apparently learned their lesson too well, though, because afterwards, that team always rushed through the creek, and wouldn’t even consider stopping for a drink.”

“And,” Verne adds with a smile, “they had the last laugh. Because after that, we had to haul water out to the fields for them, every single day.”