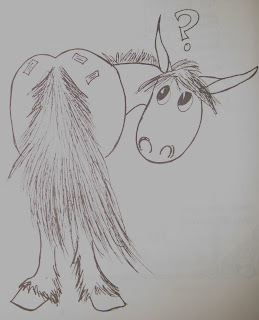 He had the gentleness, height and color pattern of a Budweiser draft horse, and the narrower body of a thoroughbred. He wasn’t born with a lot of jumping talent. In fact, he often escaped our pasture by laying down and wiggling under the fence, leaving broken lower boards behind. Like a cow, he must have figured that if he could get his head through a fence, the rest of his body could surely follow.

One moonlit night, he made his escape, and happily roamed our suburban neighborhood until becoming fascinated by the lights streaming from someone’s bedroom window. He tramped down ornamental bushes at the side of the house to take a closer look, and–being 17 hands–he was tall enough to press his nose against the screen window.

The people inside saw only a big white shape (his Clydesdale blaze) hovering in the darkness, and what appeared to be two strangely glowing orbs…his eyes. He looked for all the world like some sort of space alien out of a 1950’s comic book. In shock, they frantically called the police, who found my gentle giant watching the family’s panic with great interest.

Cherry executed numerous escape plans, before his wanderlust was finally curbed by a double row of electric wire on our fences, but his last adventure was the most unforgettable.

My horses were stabled in a small barn added to one side of our garage. One day, when I was 11, I decided to name my barn “Bittersweet Stable” after the bittersweet vines that grew up along the walls. The name sounded so grand to me that I used some raspberry picking money to send away for return address labels with Bittersweet Stable added to my name and address.

I was so excited when those impressive labels arrived that I stuck them on everything: brushes, pitchforks, fly spray cans–and I even put a dozen or so on Cherry’s rump. His big swishing tail swept most of them off during the day, but those along his croup stayed firmly glued. The photo here is of a cartoon I drew of him, way back then.

That night, Cherry escaped his pasture and was long gone by the time I went out to do my morning chores. Dad and I were in the car, ready to head for Cherry’s usual destination–a wooded area with a nice grassy meadow–when Mom called outside to say that a police officer was on the phone.

She was bursting with laughter when she handed me the receiver.

Cherry had gone a whole new direction this time, and had been found several miles away by someone who had notified the police. The police officer was calling to say that my errant horse had been captured…

And that this was the first time he’d ever been able to identify a loose horse by the return address labels so conveniently attached to its rear!

Sooo…what about you? I’d love to hear some of your animal stories, too!