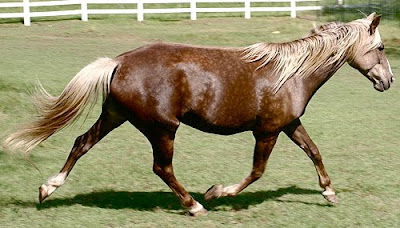 The pampered horses of this era might find it a bit difficult to change places with their relatives from the past, if Verne Upmier’s recollections are any indication. Verne probably rode more, trained more, and sold more horses during his seventy years in the business than anyone else in Eastern Iowa, and he probably held the records for interesting tales from the past, too.

Forty or fifty years ago, before aluminum four-horse slant goosenecks were even a twinkle in some designer’s eye, trailering could be a risky proposition. Verne remembers loading up his horse Copper after an all-day trail ride and heading home after dark. “I felt a little lurch as we rounded a curve,” he says, “but I didn’t think much about it until we got home. I went back to unload my horse and he was gone!”

Copper had fallen out of the open top trailer. “I turned right around to go after him, and found him calmly grazing by that curve in the road. He apparently hadn’t been too rattled by his sudden launch to the asphalt, because he loaded right up again for the rest of the trip home.”

Most horses seemed to take the foibles of modern equipment in stride, earlier in the last century, Verne says. “It wasn’t uncommon to knot a horse’s tail around a length of rope, tie the rope to a small tractor or car that was stuck in the mud, and then use the horse to pull the vehicle to higher ground.” Imagine that sort of use for a show tail of today!

Maybe Verne’s horses of the past were docile about such things, but this old mare was having none of it. She fidgeted. Realized she was caught. and took off across our yard through the orchard—dragging the entire swing set behind her until she hit the hedge. She made it through but the swingset caught up in the bushes and miraculously, the knot in her long tail released without hurting her.

That–many other escapades when I was a child–have always confirmed the fact to me that I surely had a guardian angel working overtime on my behalf. Because now, as a cautious adult, I can see so many times when my foolish moves could have led to my demise!