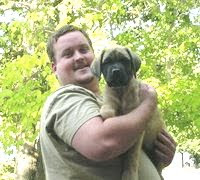 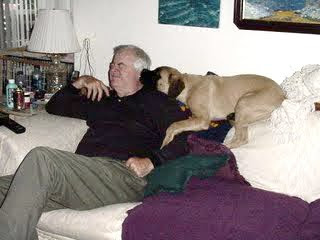 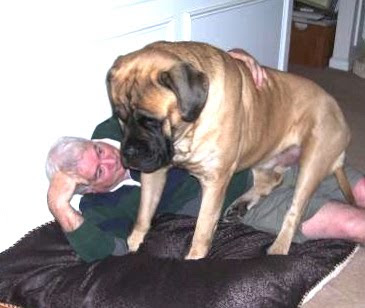 When your dog is a moose… you buy a motorhome.

I love dogs. I really do, but I wanted a break after our last one went to doggie heaven, because I wanted to travel without worrying about who would take care of the dog. Besides, he’d been the best one we ever owned, the only one that truly wanted to please. What ever we told him, he’d do in a heartbeat.

Unfortunately, the hubs missed him so much that within two months, he had me at a kennel in Alabama, looking at a mastiff puppy. My dreams of travel trotted out the door with a set of gigantic puppy toes. I mean, those babies were bigger than any adult dog’s I’ve ever seen!

That should have been my first clue.

I’d never even seen a mastiff before. But a friend of our son Greg owned two. Said son fell in love and of course, told his dad about them. It must be a gender thing. Women tend to like little dogs that we can cuddle and hold in our laps.

Guys want one they can ride.

Father and son spent hours on the Internet, searching for just the right place to get one. Me? I was in my office working on my latest manuscript, blissfully unaware of their activities. They would have made a great spy team for the CIA. They carried out clandestine investigations right under my nose, and I never knew it.

The hubs used psychology. At the kennel, he told me to pick out the one I liked best from the litter. What did I know? I picked a cute face. Silly me. That should have been my second clue.

All puppies are cute.

The Hound of Baskervilles was cute when it was a puppy. Wolves are cute when they’re puppies, but that doesn’t mean I should own one. But somehow, this puppy we named Shadrach found its way into our car and came home with us. We left Meshach and Abednego back at the kennel.

Son Greg was delighted with Shadrach.

As he grew, one trait became apparent quickly. Shadrach was a chicken and he wanted to remain very close. He even laid on the back of the sofa like a cat. He’s terrified of the dark, of shadows he can’t explain, rustling leaves, hats, oddly placed trash cans on the sidewalk, thunder, and fireworks. One muffled bang and he is in someone’s lap.

He was even afraid of his new dog bed. The hubs laid down on it to show that silly dog what it was for. What did Shadrach do? Sat down on the hubs lap.

I still want to do some traveling. After all, I have five newly found sisters in Seattle that I have visited only once. But what do we do with the moose? Hubs did what only a man would do. He bought a motor home large enough to carry Shadrach.

Author Ane Mulligan has lived a varied life: from Christian lobbyist to business manager, from playwright and drama director to novelist. Her lifetime of experience provides a plethora of fodder for fiction. An adoptee who found her birth sisters, she started a blog for sharing adoption stories. Ane has published over two dozen scripts and numerous articles. She’s a humor columnist for the e-zine Afictionado and editor of the popular literary blog, Novel Journey. Whether its novels oer plays, writing is her passion, but using her talent to serve the Lord is her grand passion. She lives in Atlanta with her husband and a dog large enough to qualify as two.