↓
Hello! I’m excited to be a guest blogger today on “All Creatures Great and Small”. I’m equally excited to share a story or two of the adorable pets I’ve been fortunate enough to have known and loved. 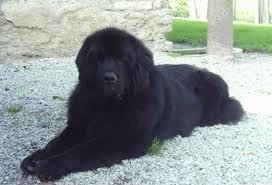 Let’s start with the large.

Norman was big even for a Newfoundland dog, the fourth largest breed in the world.  He had a coat of long shiny black hair, loved humans, and we loved him right back. He was a big, goofy kid disguised as a dog, and he lived to chase anything that moved.
We were never quite sure if it was his puppy enthusiasm that caused the collision, but when we were playing tag one warm summer’s day Norman ran head first into a full grown maple tree. In my mind’s eye, I can still hear the thud of his skull smacking against the trunk. Everyone stopped running. Had he hurt himself? Not a chance. The impact dazed him for all of a few seconds, and then he resumed the game!
Another time we were tobogganing and Norman, being Norman, wanted in on the fun. The only
problem was he was far too big to fit on the Crazy carpet, and there was no way he could fit on my lap. Undeterred, he raced down the hill alongside me. Halfway down he grabbed the back of my jacket in his teeth. Stopping dead in his tracks, he yanked me off the carpet and whipped me around in a circle. Fun for Norman. Kinda scary for me!
Next on the list is the medium.
Peter, a white and black mutt, was born when I was two. He was the runt of the litter and to this day I still cheer for the little guy! 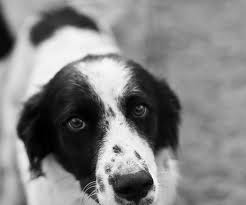 In the 1950s there was no special formula dog food. (Not that we could have afforded it even if there had been.) Peter ate table scraps and what he could forage from our garden. He was particularly fond of green peas and on those rare occasions when he did receive a bone, his tail never stopped wagging.
He spent his life outdoors except for those winter nights when the temperature dropped below freezing. It took forever for my father to coax Peter inside to sleep in the basement. Later, he built him a dog house, but most nights Peter still preferred the top step of the front porch.
Never a cuddly, lap dog, Peter was a true and loyal companion who lived 16 human years, which as you know translates into a very long life in dog years. 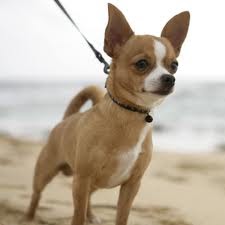 Last but not least is the small. Literally. The Chihuahua is the smallest breed of dog, but many claim pound for pound they rate the biggest in personality.

Meet Peanut.  She may be fictional, but she’s very real to me. She plays an important role in my debut inspirational romantic suspense novel. In true Chihuahua fashion, she’s a bold and brave little watchdog. There’s nothing Peanut won’t do to protect her owner. Or her unborn pups. But wait, I don’t want to giveaway all of the story!
I do, however, want to give away a pdf copy of DEFENDING GLORY, first book of the Piedmont Island Trilogy series.
To enter drop by my website –http://www.AnneKAlbert.com and leave a comment that you saw me on Roxanne’s All Creature’s Great and Small blog. I’ll pick a name at random on March 1st, and announce the winner the following day on my blog – http://anne-k-albert.blogspot.com
Thanks so much, Roxanne, for giving me the privilege of being your guest blogger today. I’ve enjoyed every single minute, and so have Norman, Peter and Peanut!
Anne K. Albert
Howdy!  For those of you reading this on Facebook, this has originated at the All Creatures Great and Small blog, htt://roxannerustand.blogspot.com.  I hope you’ll come on over and chat with Anne there, or just stop in to say hi!   Roxanne